Living local, urban design, sustainability, landscape architecture, and places in the East Bay. Design that works where it is.

How to Reform your Killer Cat 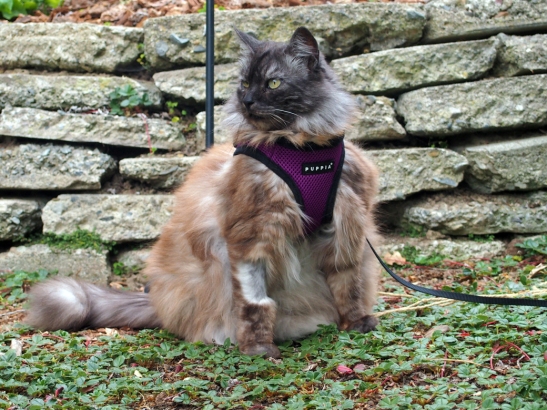 Our cat wears a harness and a leash when he’s outside. Why? He’s a killer.

I love gardening and Jan loves birds. As soon as we had our own yard, we started to create a habitat garden to attract birds and insects. A couple of years later, an abandoned cat adopted us. At first we tried to run him off the property, but we eventually gave in to his charms, took him in, and named him Theo.

Theo was used to spending his days outdoors frolicking, so we left him outside while we went to work. We knew we had a conflict of interest in the cat vs. bird department, but thought it was probably okay since he’s a male, and females are generally the hunters of the feline world. Wrong! After the second time he came into the house, bird in mouth, saying “oh, look at the present I have brought for you!” we attached a bell to his collar. This turned out to be about as effective as trying to stop a flood with a box of cotton balls.

We decided the only thing left to do was to keep him in the house all the time, essentially converting our house into a prison … not only for the cat, but for us, too. No longer could we open our doors and windows to the warm air and sweet smells of our own yard. To make things worse, Theo was so distraught at being cooped up that he started tearing the house up, scratching the doors and rugs, and yowling his head off 24/7. The only saving grace was the knowledge that the birds were safe.

Bottom line, no matter how convenient it might be to let your cat out, and no matter how much joy your kitty might get from wandering unfettered through the neighborhood, it’s irresponsible for cat owners to allow their pets to kill birds. And don’t kid yourself – that’s what cats do – for fun! Most of the birds in our yard are native to this region. They belong here. Obviously, the cat does not. Songbirds are disappearing from North America (and the rest of the planet) at an alarming rate. According to an article in National Geographic, “some widespread [bird] species generally thought to be secure have decreased in number as much as 80 percent since 1967, and the 19 others in the report have lost half their populations.” The article lists the causes for this shocking loss of birds as global warming, habitat loss, wind turbines, and cats.

In her book, the California Wildlife Habitat Garden, Nancy Bauer describes how a homeowner designed a cat run made of redwood planks and wire that connects cat doors in the house to an aerial system of caged walkways through the treetops. Nice-but I’m a designer and this garden is also our habitat. We prefer to keep the beautiful setting we have created. We considered a catio: an enclosed outdoor space where we could trap the cat while we opened the doors and windows. Again, aesthetics trumped comfort. Finally, we came up with the idea of outfitting Theo with a harness and leash.

We bought an inexpensive adjustable cat harness and leash at the pet store and added about 6 additional feet to the leash, using twine. The salesperson cautioned us to stay with the cat when he’s tied up so he doesn’t choke himself. The first time we tried the harness Theo hated it, went a little crazy, and twisted out of it-but it didn’t take long before he caught on. We upgraded to a nicer harness from the dog department because the cheap model tangled his fur. Now, Theo is excited to get into his harness, knowing he’s going outside. We sometimes tie him near the doors so we can see him and have the house open.

Now everybody is able to enjoy the bit of nature outside our doors and the birds are safe from our little killing machine.

TELL US ABOUT IT! Sometimes trying to uphold “the greater good” in your day-to-day life can be impractical at best, or just a flat-out pain in the butt, and it is tempting to fall into the “tragedy of the commons” trap – i.e., I am just one person, so the effect I have overall doesn’t really make a difference. We’d like to hear from you about how you have dealt with these kinds of challenges.

Click on an image below to start a slideshow. 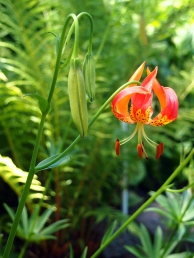 3 comments on “How to Reform your Killer Cat”

What do you think? Cancel reply